Future Updates Will Be Announced On a Different Blog

In order to consolidate things, I will now make announcements regarding changes to all of the Craypoe.com associated websites on the "Bpb craypoe's World" blog/ it will make things easier for me.

I thought it might be time to simplify things and limit the number of blogs  I will be updating. So here is the LINK.

We Are Currently Removing Some Clutter From Our Websites

Soon, Adobe will be stopping all support for Flash. Since we have some flash content on our websites, we will be slowly removing it all over time. Also, we have some various links on some of the websites that are no longer relevant and so they will also be removed. Some RSS feeds no longer function either. Guess what will happen to them. That's right, they will be removed too.
Some of the flash content will be replaced with animated gifs and RSS feeds will just be replaced with some links. Please be patient as we take on this large project. in the end, you may just be surprised at what we can do.
Posted by Bob at 2:52 PM No comments:

A number of years ago, I developed a site called Guitar4Blind.com. It was a website designed to teach blind people how to play guitar chords with the use of screen reading software. It was developed with the assistance of a blind guitarist from the United Kingdom named Terry Hopwood-Jackson.

I would create a page and send it over to Terry for testing. Terry would test the site and inform me of whatever typos or mistakes may have been in the page. i would make the necessary changes and he would test the page again. After all necessary corrections were made to a page, we would move on to the next one until the site was eventually finished.
Recently, another blind guitarist reached out to me, named Casey Harper from the state of Virginia. he made some additional suggestions regarding navigation and features to be added to the site.s so with Casey's assistance, I made some changes and added some features. I would inform Casey that a page or section was completed and Casey would test them.

One of the biggest changes to the site was navigation. I added links that would allow people to skip over certain sections that had various descriptions and explanations. This was specifically added so that return visitors could skip over the parts they have already read and familiarized themselves with. The entire site was basically optimized for quicker and easier navigation for return visitors.

I also added a new chord finding feature/ before, the site only allowed people to learn chords by key. Casey suggested also listing them by their root note name. This is a feature I had thought of doing prior to Casey suggesting it but never quite got around to it. I figured that since I was already making major changes to the site as far as navigation goes, I might as well make even more changes.

With Casey's assistance, the site more than doubled in size. I thought that now that a third person (Casey) has been added among the list of contributors, it seems more like the beginning of an organization dedicating to teaching blind people music online.

Maybe more features will be added over time. However, for the meantime, there are already plenty of features there. If anyone reading this blog knows of someone who is blind or visually impaired, use screen reading software and want to learn guitar, please pass on the information. The whole idea behind the website is to give the blind more opportunities to learn music online. In fact, the site has not been optimized to earn money at all. It's not about money, it's about giving more people an opportunity to enjoy making music. Here is the link: http://guitar4blind.com

Bob Craypoe, also known as R.L. Crepeau
Posted by Bob at 6:31 AM No comments:

As of December 31st 2015, DrPsychotic.com celebrates fifteen years online. It was all the byproduct of a failed local arts magazine.

You see, In 1999, I decided to try to do a local arts magazine that would include humor and some of my cartoons as well as a few other things. It was supposed to be sort of the local arts scene meets Mad Magazine. Unfortunately, it only survived three issues and a fourth was finished but never went to print.

After the magazine went under, I took what was left of some of the content and created a website with it. At first, it was a little lean on features and maybe had a dozen pages or so. Since then, It has grown to be over 3,000 pages and includes features like guitar lessons, mandolin, banjo, balalaika, piano and mandola chords, as well as harmonica and soprano recorder songs.

The biggest section of the site is the classic poetry section, which is about 1,800 pages itself. Then we also have jokes, a photo gallery and a cartoon gallery. That's not all either. Just check the site out for yourself to see what all is there. Just log on to DrPsychotic.com.

After the creation of DrPsychotic.com, I decided to create more websites. Some did well and others did not. I eventually created Craypoe.com to be a centralized location where all of my websites may be accessed from. Now I refer to it all as the Craypoe.com network of websites. 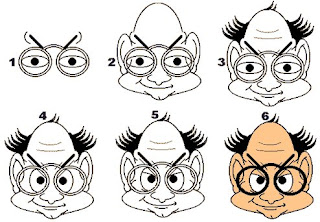 Originally, the Doctor Psychotic character was just a 2D cartoon as displayed on the left. You can see how he was actually developed in stages. A few years ago, I decided to create a 3D version like the one you see above. Doctor Psychotic was the beginning of my internet presence and it has grown significantly since December 31st 2000. I have written hundreds of blog posts and online articles. I've created a number of videos and posted them on my YouTube page. I have my music online as well too.

I am not bragging about all of the things I have done and continue to do or the things I have achieved. The point is that it all really started as a result of one of my failures. I could never have foreseen back in December of 2000 what would eventually become of it all, up to this point. After the failure of the magazine, it was pretty hard to imagine that all that much would come from that failure. As I look at it all now, I am so glad I didn't give up on everything.

So if you attempt something and fail, try to think of what you might be able to salvage from it. Start over again and build up from there. Learn from your mistakes and keep plugging away at things. You just never know what might happen in the end. Good luck with salvaging your failures.

More Features Have Been Added to the Punksters.net Website

More features have been added to the Punksters.net website and related blogs. A special section was added for the superhero team called the Dysfunctionals. A blog was also created for them as well.

On the links page, a lot of comic strip related links have been added, for those who are interested in comics. There are links to a lot of the classic Sunday morning comic strip websites.

More characters have been added on the Characters Page. this should reflect the most recent character count, which is nearing about thirty characters now.

I have also begun to play around with animating some of the characters. I have created some animated gifs. You can expect to see even more as time goes by. On the blogs page, I have added a new blog about how I get some of my character ideas and the newest one speaks about the family and friends of the main characters.

So please check out the website and view the new additions and changes for yourself. just CLICK HERE..
.
© R. L. Crepeau
Posted by Bob at 8:51 AM No comments:

A New History Related Section Has Been Added to DrPsychotic.com 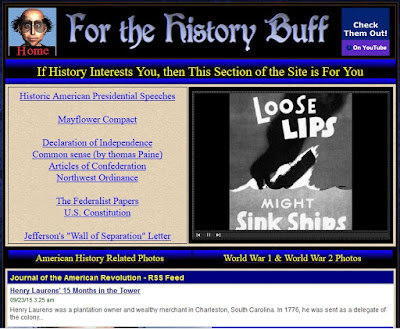 A new section has been added to the DrPsychotic.com website. the section is called "For the History Buff." it is a section that was created to appeal to people who have an interest in history.

The section currently features famous speeches by American presidents. It has at least one speech from each American president. included among them are inaugural addresses, the Gettysburg Address, Roosevelt's pearl Harbor Address, Truman's Hiroshima Address as well as G.W. Bush's September 11th speech.

The section also includes all 85 of the Federalist Papers, the U.S. Constitution, declaration of independence, the mayflower compact and more. all of the content was migrated over from another site that will no longer be updated and will be soon taken offline. it's all part of the consolidation process, where we will be moving content over from the sites that generate less traffic to the sites that generate more. We feel the content will not only be more likely to be seen but add value to the already more popuular sites we maintain. So give it a look and see how you like it: 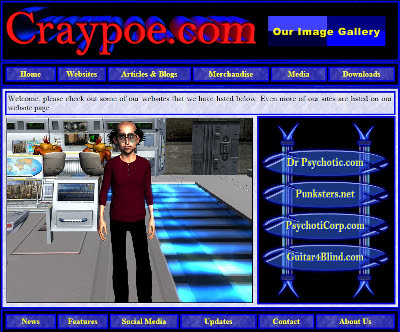 Craypoe.com has a whole new look these days. The entire website has been redone and some new features have been added as well. It's also considerably larger. the site has gone from about a dozen pages to over 70.

Many of the pages that have been added to the website are part of the image gallery that features the 3D artwork of R. L. Crepeau. You may browse the images by category.

Under the Articles and Blogs section, a few new RSS feeds have been added. Even more will be added to that section in the future. Don't worry, we will let you know when that happens too.

Some new merchandise has been included in the merchandise section. so be sure to check that out, if you would be so kind. Some of the Craypoe.com associated websites will be discontinued in the future. their contents will be moved to other sites in order to consolidate the websites in order to make them easier to manage. you will be informed of them as well.

So check out the new look and features when you get the chance. Thanks. 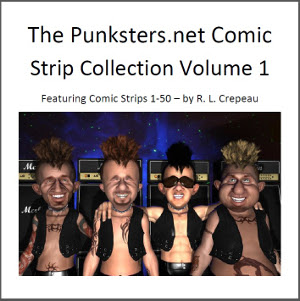 This is a collection of the first 50 comic strips from the Punksters.net Comic Strip, created by R. L. Crepeau. It is available as an e-book download in .pdf format.

What Not To Do As A Musician 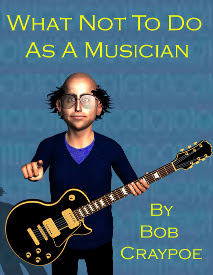 This Kindle e-book is written by Bob Craypoe, a musician, for musicians. It covers the many mistakes a musician can make in the pursuit of a career in the music business. It is great for young musicians who could use the advice of those who have done it for a while as well as older musicians who may not be making progress as fast as they would like. It doesn't matter if the musician is just looking to make a few extra dollars or make a living from music. This book would be helpful in either case. Click on the link below for more information:

CLICKE HERE TO FIND OUT MORE!

Do You Want To Know How Chords Get Their Names? 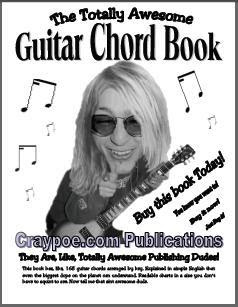 This is an E-book written by Bob Craypoe, the creator of Dr Psychotic. It has guitar chords listed by key and explains the music theory behind chord construction.